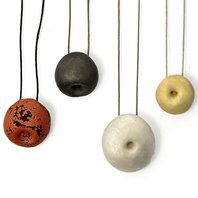 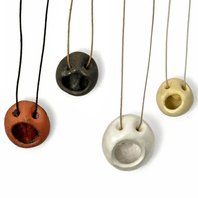 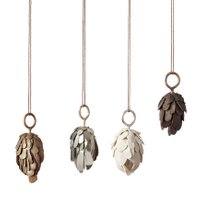 New exhibition in The Most Secret Gallery

What will you see?

Albert René, Muhamad, Emmy, Blaise are some of the names Peter Bauhuis has given his necklaces. They do not refer to family members and friends, but constitute the first names of famous mathematicians, but connection is not as surprising as one might think. In the part of mathematics that goes by the name topology, the central problem is to classify geometric shapes as curves and surfaces. Within knot theory, work is being done to develop theories for describing knots. Both of these mathematical fields work to create a foundation which resonates with Peter Bauhuis' cast necklaces and rings. The pendants can be seen as variations on the shapes that can occur when different curves are shaped in metal, but the location of holes and gaps also cause them to resemble faces.

“Alula” is the title of Josephine Winther’s series of necklaces. The word comes from Latin meaning "little wing" and is used to describe the small feathers that are attached to the front of the wings of a bird, often referred to as their "thumb". The small flaps that form the bell-shaped pendants of Josephine Winther necklaces, are inspired by the shape of the alula. This is jewelry that speaks to many senses at once. In addition to working with visual and tactile qualities, Josephine Winther has worked to employ the sound of different materials. The intention is not to create a musical sound process, but instead simple, concrete sounds, which exist when materials such as porcelain, silver and bronze are put in motion. Some of the necklaces also have space that is conceived to be a poetic break with space for nothing.

"120 dead oysters" is the title of Kim Buck’s contribution to the exhibition: a pearl necklace consisting of 60 white and 60 black pearls held together by a gold ring. The pearls are of the best quality. The white pearls are Akoya pearls, while the black are Tahiti pearls. Through an understanding of the morse alphabet, one will be able to read the title by starting at the gold connector. The black pearls represent the short and long signals, while the white should be read as spaces. In his entire practice, Kim Buck has been occupied by the discussion of the conventions and values of the jeweller discipline. This is evident in this work, which draws attention to ethical choices of use of materials. Pearls are in high demand, as their aesthetic value is extensive, but most of them are extracted through large farms. The farms are synonymous with work opportunities, but simultaneously impact the environment, as many oysters are disturbed and destroyed.

This is the third time Kim Buck has invited two colleagues to exhibit with him in his Gallery which is located next door from his studio and shop at Rådhusstræde 10 in Copenhagen. German Peter Bauhuis (b. 1965) and Danish Josephine Winther (b. 1964) both have similarly to Kim Buck (b. 1957) been active both as artists and educators. Peter Bauhuis is located in Munich, but also teaches at Alchimia, a school for contemporary jewelery in Florence, while Josephine Winther is the discipline leader for the newly created line for "accessory design" at the Design School Kolding. The three exhibitors have not selected a common theme, but they are all active in the definition of contemporary jewelry. And with The Most Secret Gallery Kim Buck had intended to create a platform for viewing and discussion of international contemporary jewelry.

The most secret gallery

The exhibition lasts until October 23rd 2015.